BATTLE OF THE BANDS

Ashbourne we’re coming for you! As part of the Ashbourne’s Jubilee celebrations on the 3rd of June Y Not has procured some local talent to go head to head in a battle to win a coveted slot at our 2022 festival. Come down have a beer or 2 and vote for your favourite act for a chance to WIN 2 x VIP Tickets to Y Not 2022.

Y Not has always had a burning passion for music discovery and is proud to support emerging talent in the music industry. The Battle of the Bands event is an extension of this, collaborating with Y Not’s local audience and focusing on the local talent that roam the nearby regions of Derbyshire. We are honoured to be working with our local community and to be able to present this huge opportunity to the winner of this year’s Battle of the bands.

Scan a QR code on the day of the event and vote for your favourite act of the competition, enter your email and be in with a chance to win 2 x VIP tickets to Y Not 2022! 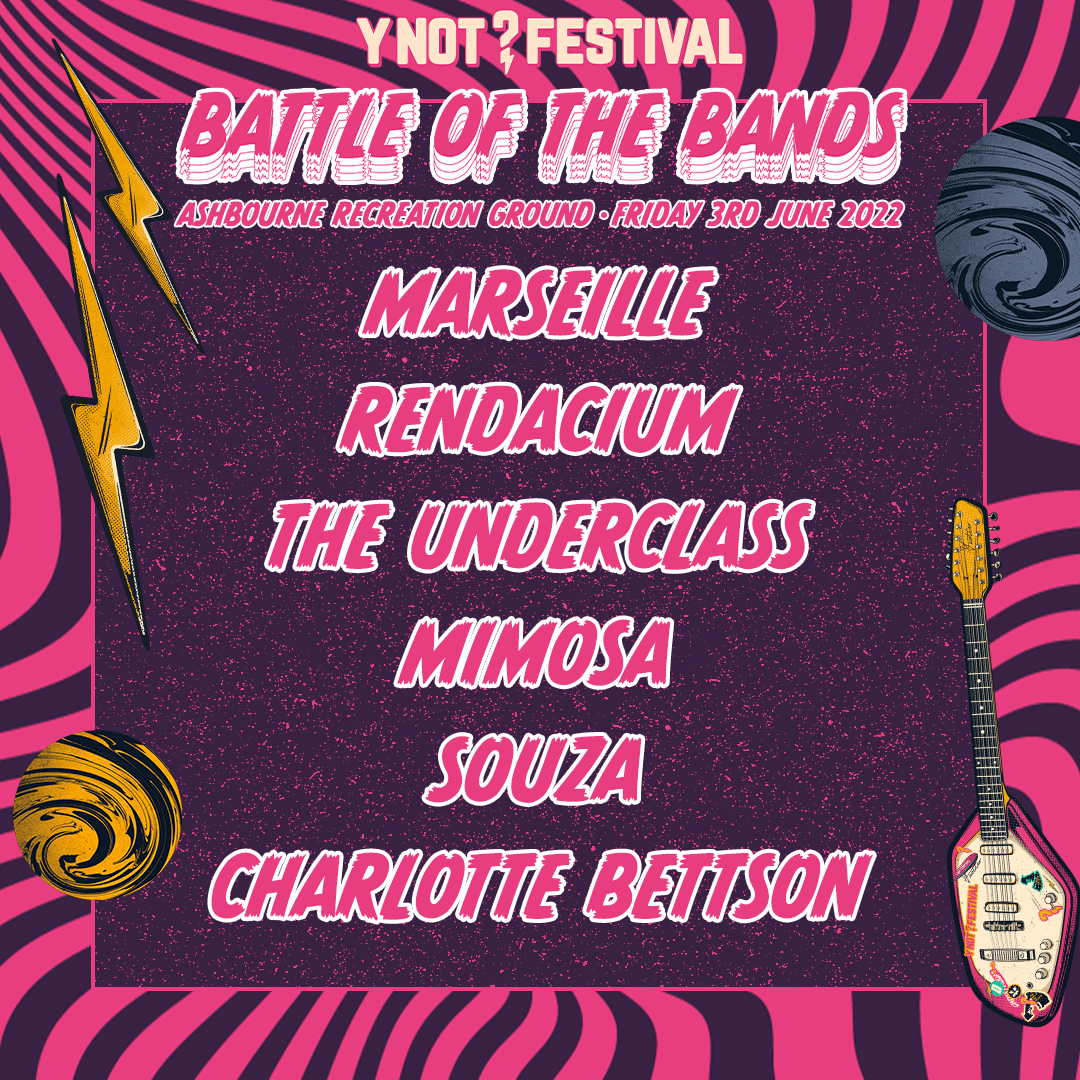 BATTLE OF THE BANDS LINE UP 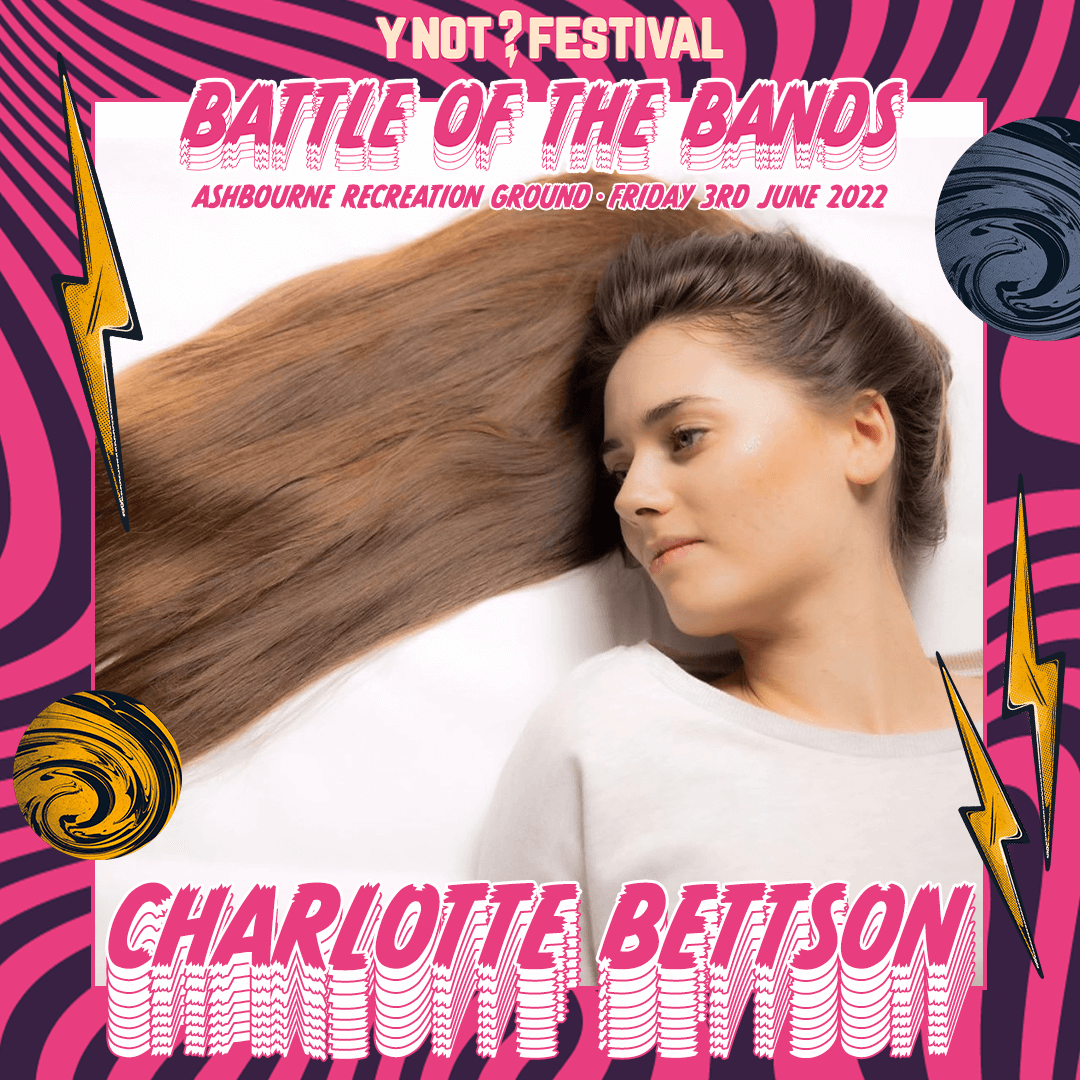 Since starting releasing music in 2019, after her beloved black Labrador passed away at a young age and wanting a project to focus on, Charlotte Bettson’s music has received an abundance of support from BBC Introducing, including getting 4x track of the week. The 22 year old from Ashbourne, Derbyshire started off acoustically, writing about her mental health journey, and has now transitioned into a more indie pop / rock style, influenced by Sam Fender and Paramore and tends to write quite sassy songs in a reaction to how she’s felt in various situations. She has also featured on Amazing Radio, Capital FM, RTE, and is due to support Scouting For Girls later in the year. She even has the attention of Jack Saunders from BBC Radio 1 who has played 2 of her songs on his twitch stream. With 13k followers on Tik Tok Charlotte is one to keep an eye out for. 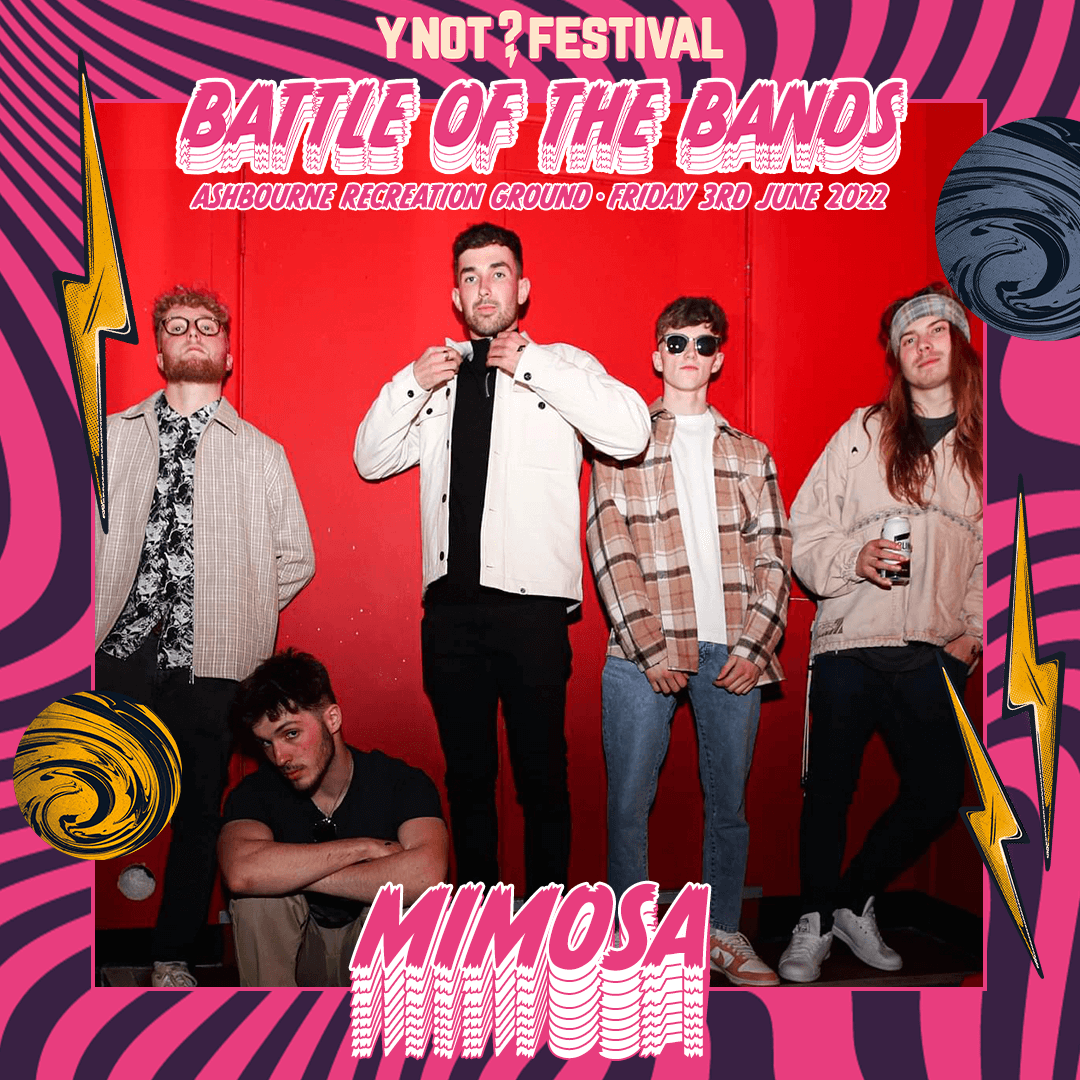 Mimosa are a 5 piece alternative indie band based in Chesterfield. Influences include Arctic Monkeys, Oasis, The Red Hot Chilli Peppers and more. Playing stages such as The Leadmill, Sidney & Matilda in Sheffield, The Chapel & The Chameleon in Nottingham and the Head Of Steam in Newcastle. They have 3 singles released, with nearly 10,000 streams over all with plenty of other material ready for release! Mimosa have earnt a dedicated fan base that may be small but it is certainly strong, they hope to grow more and more. 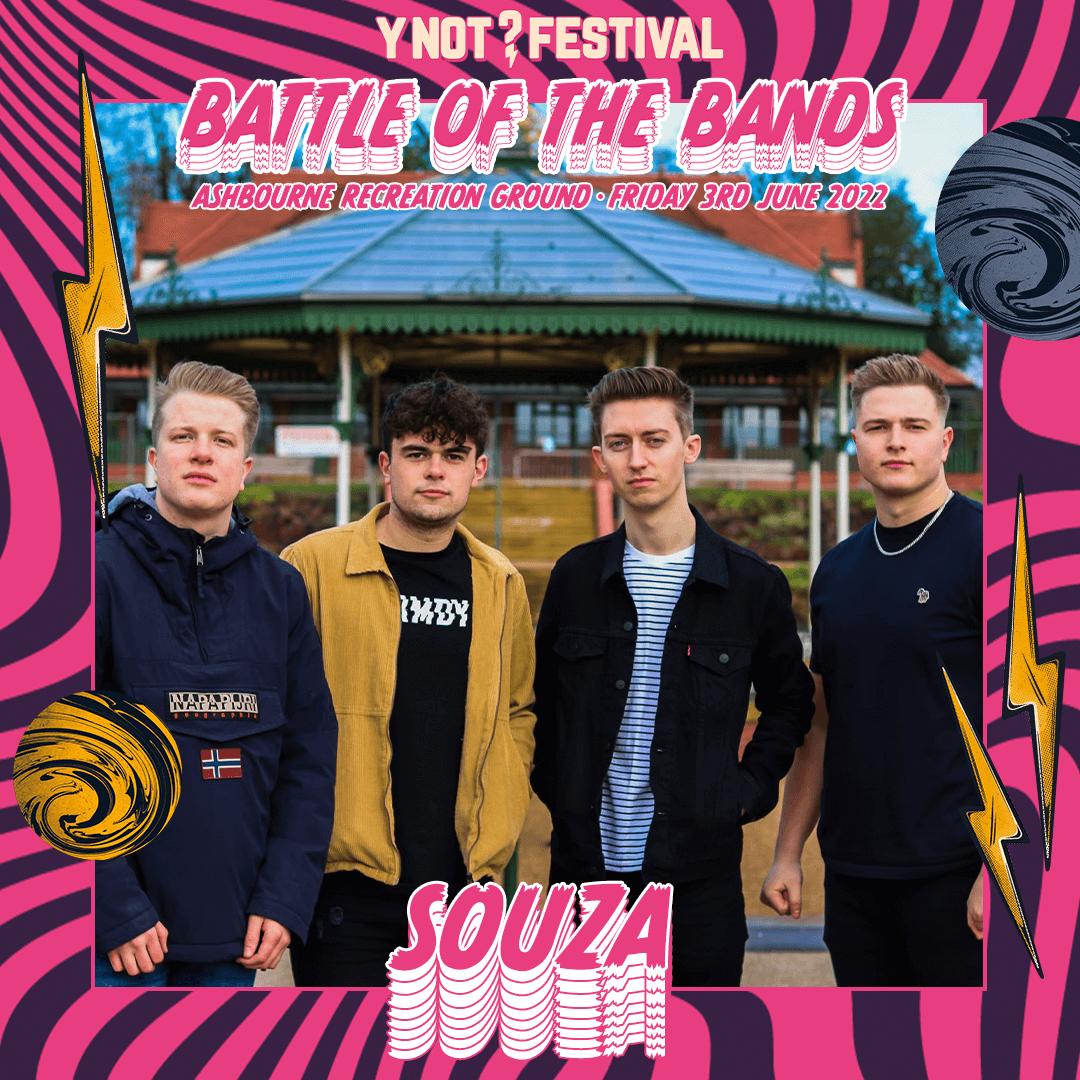 Souza are a Stoke based alternative rock band, marching to the sound of well matured electric riffs and a fresh lyrical take on the genre.

Established in 2018, the four piece brings a definitive presence to the stage. Lead vocalist Adam Rogers provides a powerful performance, whilst maintaining an interactive experience for the audience. Supported by his brother Ben and Jack Brassington on guitar, the two combine each other’s unique styles of guitar sound to generate a contemporary Britpop tone. The group are completed by drummer Harry Ball, who provides a strong foundation complimenting and driving each melody.

The four together exude the chemistry they share and quickly envelop the audience in their sound. 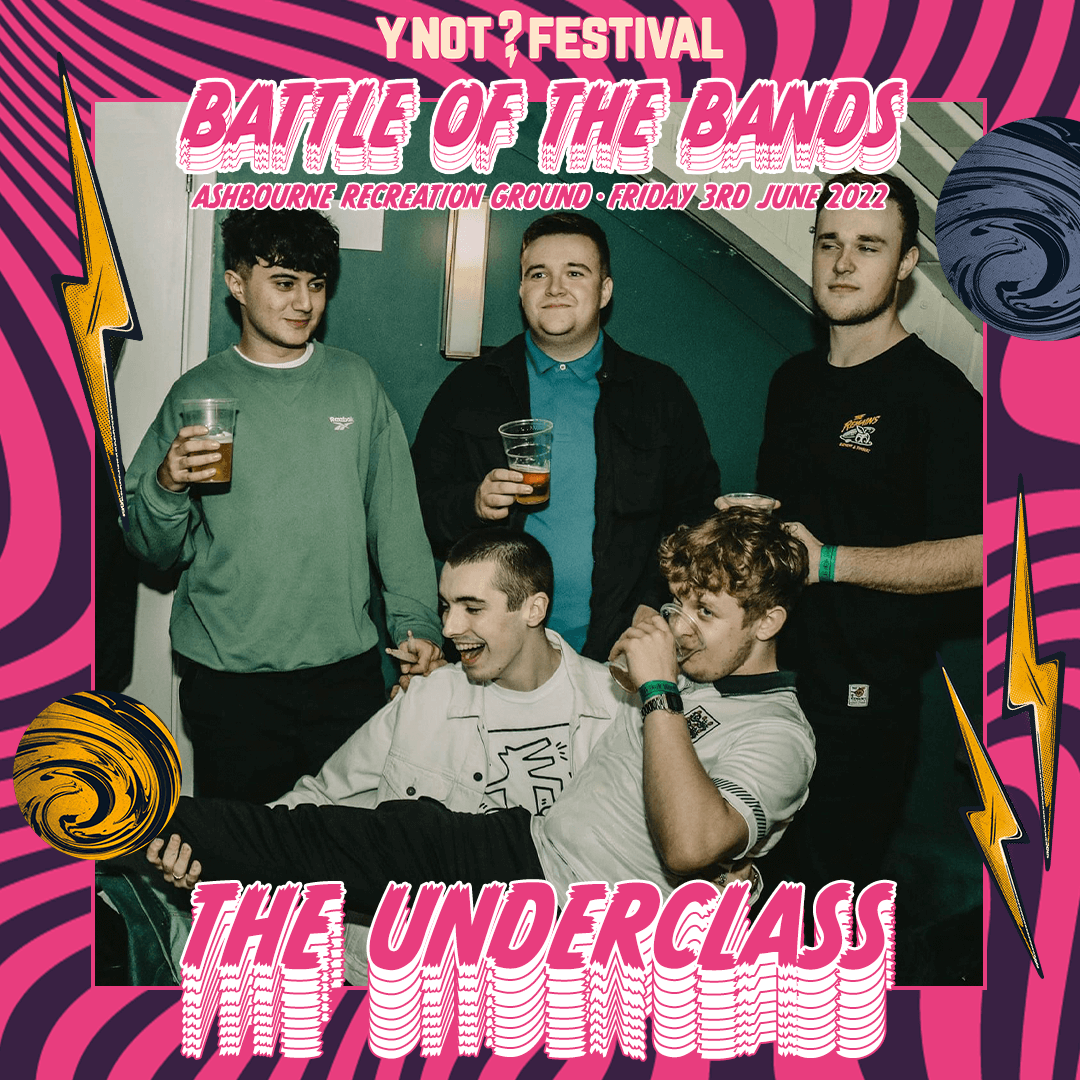 The Underclass are an exciting upcoming indie rock band from Stoke-On-Trent. They have played at some iconic venues early on in their career, such as Cavern Club in Liverpool & Jimmy’s in Manchester. They have headlined at The Underground in Stoke on more than one occasion. They also supported The Reytons at O2 Academy, Leicester, as well as supporting The Enemy’s Tom Clarke at the end of 2021, with Tom giving high praise.

The band consists of Jorge, Matt, Dill,Adam & Aaron. They released their debut track in 2019 and have grown ever since.They have over 7k followers across social media and have their music released on all major streaming platforms, as well as releasing cd’s and vinyl.

They have been included in This Feeling’s ‘Big in 2022’ and will be continuing to gig under their promotion.

The Underclass have several gigs already lined up for 2022 including main support for The Royston Club in Coventry at HMV Empire.The band also have some very exciting new music coming soon.

Their most recent track ‘The One’ has been the band’s most popular to date, racking up almost 20k plays on Spotify alone.With new music approaching, the band is set to get bigger and bigger 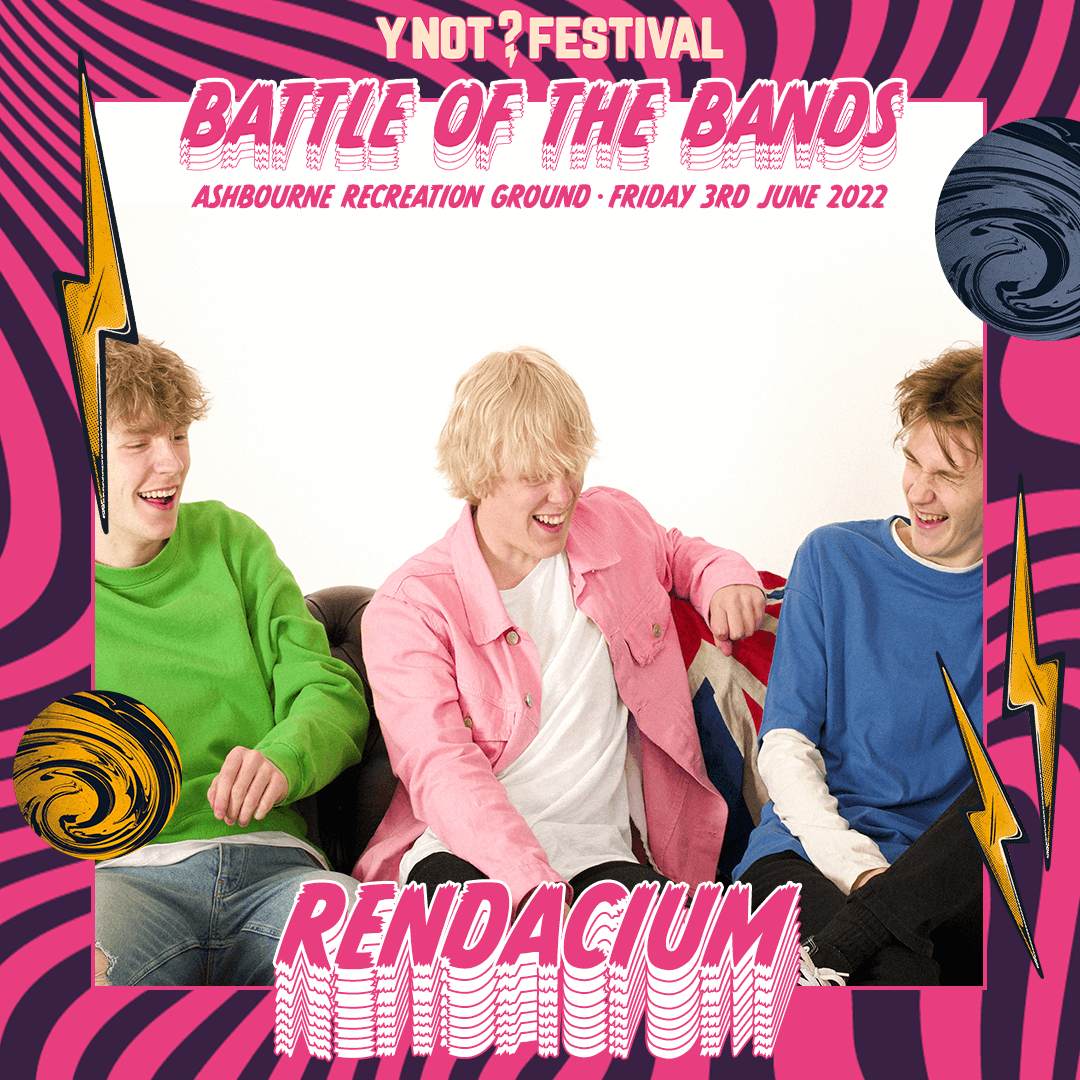 Rendacium’s raw, energetic, youthful spin on pop-punk is enough to make any angsty teenager feel a little more optimistic when life isn’t quite going their way.

Hailing from the East Midlands, UK, since 2017, taking inspiration from pop-punk legends Blink-182 as well as the likes of Busted, YUNGBLUD and Green Day. Rendacium’s four-year journey has led them to embrace their natural rawness, lively-strong minded characters and has evolved their sound into what they now categorise as “British Pop-Punk”.

With their debut album ‘Lies, Mood Swings and Bullsh!t’ out right now! Rendacium are taking pop-punk back to its roots with genuine and relatable lyrics, powerful guitar melodies, killer bass lines and a massive drum sound. 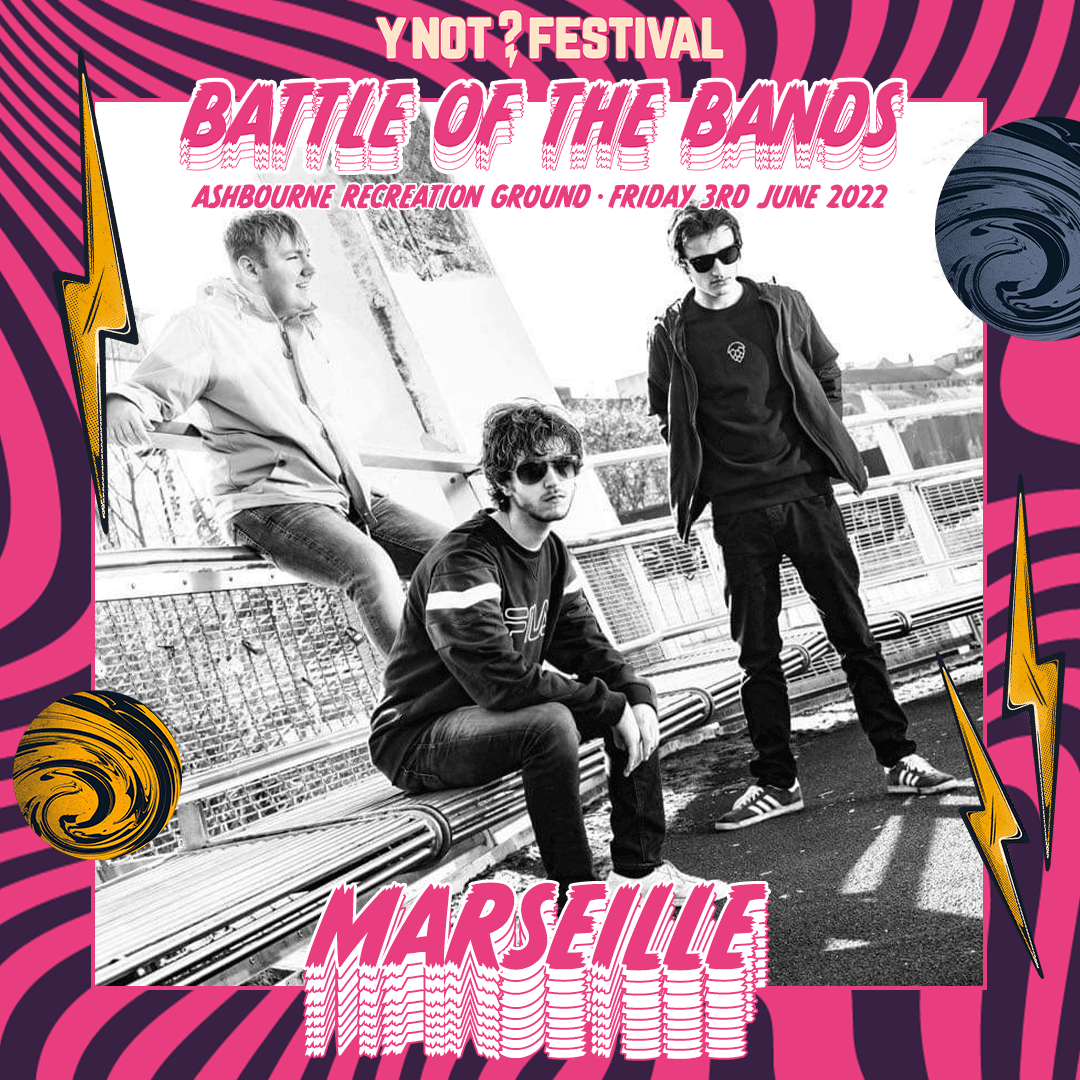 Marseille are a young rock n roll band from Derby, England signed to ADR Records. Will, Tom, Joe and Lennon play music reminiscent of the 90’s Madchester scene with their own individual influences. In 2021 despite Covid-19 disrupting the music scene. Marseille kept busy, releasing their debut single, aptly entitled ‘Worlds Gone Mad’ and 2 further releases ‘Shout It Out Loud’ and ‘State of Mind’. In February 2022 the band upped the ante releasing She Knows A Place. That track attracted lots of enthusiastic fans and caught the eye (and ears) of Birmingham’s ADR Records.

The band were promptly signed and ‘Forget It All’ is the label’s first release. With an average age of just 17, this band is sure to go far.